What is the fundamental processes that supports the energy for all living organisms? Why are trees so essential for life on earth? How do those trees make food for themselves? How do humans get our oxygen? Where does it come from and how was it made?

In biology class, we explore the answer to these questions: Photosynthesis.

All living organisms need energy; and glucose is the main source of energy for plants, animals and humans. Glucose is produced in a complex process that requires light energy from the sun and water from the ground which is called Photosynthesis. This is the method that plants, as autotrophs, use to create their own energy to support other heterotrophs. Photosynthesis is a fundamental process for life, as it provides organisms with oxygen that they need and recycle the carbon that we produce. That is why plants are so essential for sustaining the entire ecosystem on this planet. Not only they are producers of energy, trees and plants also help to extract the carbon out of the air; which therefore can immensely help to improve our climate conditions in an era where it is the main threat to the survival of all species.

Let’s dive deeper into how photosynthesis function in the leaves of plants.

There are two stages of photosynthesis: the Light Reactions and the Calvin Cycle.

Through these complex steps that takes place in the leaves of three trillions trees on this planet, humans, animals and other consumers are able to get the glucose that they need and the waste of our respiration (Carbon Dioxide) can be recycled over and over again.

Without trees, living organisms would not have the energy source that we need and the climate crisis would threaten the survival of all species on Earth. That is why trees are so valuable for all living organisms on this planet.

Have you ever wonder how are parasites capable of manipulating animals or hosts much bigger than them? I used to wonder the same, too. But after studying about it, I realize parasites have a unique and smart system to survive, reproduce by controlling its host.

Parasites are microorganisms that live on or inside a host organism body which they are capable of not only harm but sometimes kill its host as well.  Their main survival is through transmitting itself from one host to the other. In order to do so, they need to find their own ways to manipulate their hosts by learning abut the host’s environment, food-cycle and more.

(Example 1: Gordian Worm: Imagine its host as cricket which naturally more likely to be in dry areas rather than wet ones. However, the Gordian Worms need water to breed and mate, so when they hit the age to mate, the worms produce a protein that confuses the navigation system of the cricket which results in the confused cricket jumps into a water source. Often times, the crickets will drown and the Gordian Worms can go out to mate. Later on, their eggs will be eaten by water insects which then go out on land and will be eaten by new crickets. This is how the Gordian Worm preserves its species).

(Example 2: Rabies Parasite: These parasites often affect dogs and other mammals, traveling up their host’s nerve systems and into the brain.  This results in the inflammation in the dog’s brain which would lead to death, but before they die, the parasites would affect the aggressiveness level inside the brains, increases the virus-transmitting saliva and also making them hard to swallow. All of these effects result in the increased tendency to bite another mammal which makes it easier to pass on the viruses and parasites.

(Example 3: Ophiocordyceps or known as the Zombie Fungus: Their ideal hosts are tropical ants that normally live on treetops. Their first move to the ant is through the piercing exoskeleton which results in the ant’s convulsion that makes them fall off the tree. Then, the parasites would control the ant’s behavior which makes it wander without consciousness until the ant comes across with leaves with the perfect condition for the fungi to breed which allows the fungi to latch itself onto the leave. The ant dies and the parasite will affect its body and build a tall thin stalk on the ant’s neck which after several weeks, shoots out more spored to affect more ants. )

(Example 4: Malaria Parasite:  This parasite is an extremely dangerous kind for humans which is responsible for hundreds of millions of malaria cases every year The parasite’s hosts are mosquitos which are the spreading agents of the virus that causes malaria. The infected mosquitos tend to bite more frequently and longer. Humans who got the viruses are more attracted to mosquito bites. )

From the parasites that affect the directly to the brain (Gordian Worms), to the ones that blocks the host’s enzyme system to make them go to more preys to infect (Malaria Parasites), the ones that overdrive the immune system and increase the anxiety rates (Rabies Parasites), these parasites have powerful and effective way to manipulate species who are much bigger then them. It’s scary when the parasites can be so manipulative because we do not know what are the actions that they made us do and how much are we actually being controlled by them?

Acids and Bases are important, not only in the science world, in the industrial world and other fields as well. The different ranges of acids and bases are identified as the pH (Potential of Hydrogen) level.

In the industrial world, Acids and bases are important because a variety of products contain these two. For example, sulfuric acids are used to manufacture detergent, paper, and paint. Soaps contain a type of base called Potassium Hydroxide. Bases are also found in many cleaning products, concrete or deodorants.

We can easily detect acids or base by using the indicator, which can be a red litmus. The indicator will change color according to the level of Ph that comes to contact with it. To further test and study this theory, we have done a PH test of different substances including:

We have used red cabbage solution as the indicator. Here is a photo we got after adding each substance into a plastic cup and what it had changed when we put the indicator in.

This experiment shows how substances change their property when it comes to contact with the indicator (cabbage solution).

Carbon is an extraordinary element that can combine with itself and many other elements to create a huge range of compounds. It is a non-metal element that has four valence electrons that are involved in different chemical bonds. It is the most important element for living things. Carbon-based compounds in living things are called biochemical compounds. They make up the cells and tissues of organisms and also involves important processes to support life including making and using food to make energy. Pure Carbon exists as crystals in three forms, fullerenes, diamond and graphite. Though Carbon can form with many elements, it mostly bonds with Hydrogen to create a type of compound called Hydrocarbon.

Isomers: Isomers are compounds that contain the same amount and types of molecules but they are arranged differently. They usually have somewhat different properties especially the difference in melting points. 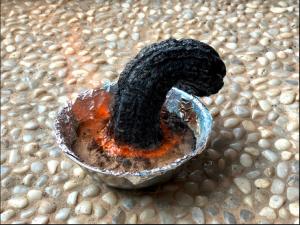 In order to understand more about the properties of Carbon, we did an experiment called The Black Snake. 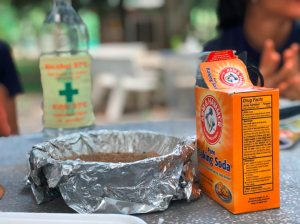 Baking Soda is Sodium Bicarbonate. When combined with acid and a liquid, it produces carbon dioxide gas. Sugar also contains carbon. When we put the alcohol into the mixture of baking soda and sugar and flame it with a match, the burned carbon will produce the carbon ash that we can see as the black snake that comes out and it is pushed or  enlarged by Carbon Dioxide that produced from the reaction between carbon items in the sugar, baking soda, and alcohol. (it is the reason why cooks use baking soda to bake because when it reacts with any type of acid or liquid, it will produce carbon dioxide which enlarges the dough). In addition, the alcohol helps to produce the constant flames that heated up the mixture.

As we learned before, all matters are made of different atoms and chemical elements. During the round 2 session, I have studied about Covalent Bond and Ionic Bond which are the combination of elements chemically as well as lessons about the elements in the periodic table. The atoms that are combined together to make different structures including molecules, crystals, etc; are joined together by the force of attraction from the chemical bond. The attraction is made when atoms share or transfer electrons. The electrons that can be shared or transfer are called the Valence Electrons which are located in the outer energy of an atom.

Some properties of Covalent Compounds are:

Another Example of Covalent Bonding is the water molecule, which consists of two hydrogen atoms (each with one valence electron) and oxygen (with 6 valence electrons). After they do covalent bonding with each other, they become the covalent compound. 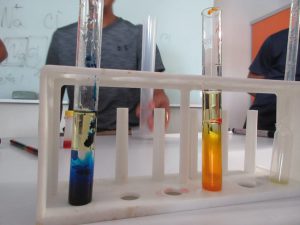 This is an experiment when we pour water into the tubes, followed by cooking oil. We could see that the oil always stays separated from water. After that, we poured in food colorings and it slowly goes through the cooking oil but stays separated(as color droplets) and then slowly, the colors dropped into the water and created a wonderful sight. 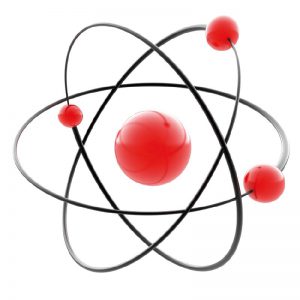 Everything that exists on this planet is made up of Atoms. Atoms are really tiny particles, consist of Electrons (negatively charged), Neutron, and Protons (Positively charged). Electrons are orbiting around the nucleus which includes Protons and Neutrons.

Isotopes are a group of the same elements which has the same chemical properties, but what sets them apart is the numbers of neutrons and atomic mass. Based on the internet, Isotopes are given the same numbers of protons.